A New Approach to Worming 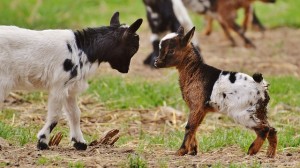 Do you worm your animals?
How often do you worm?
What wormer do you use?
Do you know why you are worming?
Do your animals seem to feel better after you worm them? How do you know? Do the skinny ones or the fat ones seem to benefit the most?

FAMACHA theory: Uses the least amount of wormer to benefit the most animals and save you time and money.
The enemy: Haemonchus contortus. A very small worm (about the size of a goat hair) that lives in the abomasum (fourth stomach) and sucks blood. Goats can lose up to a cup of blood per day. The youngest animals are the most at risk.

Each worm (female) lays 5,000 eggs PER DAY. Each animal has about 300 worms. Each animal can deposit 1.5 MILLION eggs onto the pasture EVERY DAY.

A herd of 30 goats can deposit 1 BILLION eggs onto the pasture in 3 weeks.

It takes less than 3 weeks from the time a worm larvae is eaten off the pasture until it becomes a blood-sucking, egg-laying adult.

Giving wormer to an animal only helps that animal for 3 weeks and does nothing for the worms that are on the pasture.
Faced with these odds, worming animals on a regular (or irregular) basis might temporarily help a few animals but it doesn’t really help the total worm situation.

Actually, worming animals as we have been doing is making the situation worse because the worms are very good at becoming resistant to the wormers we use.

Rotating wormers was a good idea at the time, but in practice has actually caused worms to become resistant to more wormers rather than the other way around. There are a dozen or so wormers on the market, all with different-sounding names. What most producers didn’t realize was that you had to switch classes of wormers, not just wormers.

There are only 3 classes of wormers. Worms develop resistance not just to one wormer but to all the wormers in that class.
Benzimidazoles: (white wormers) Panacur, Safeguard, Valbazen
Avermectins: Ivomec, Cydectin, Dectomax, Eprinex
Imidathiazoles: Levamisol, Tramisol, Pyranted, Morantel, id
There is a test called DrenchRite that uses a pooled sample from 10-12 animals and tests for resistance to all 3 classes of wormers. It is available through Dr. Kaplan’s lab in Georgia. This should ideally be done every 2 years to make sure you are using the right wormer for the job.

In the past, resistance was not as much of a problem because there was always a new and better drug in the pipeline to save the day.

There are no new drugs in the pipeline!

In Georgia, 90% of the worms are resistant to Panacur, Valbazen and Ivermectin. 30% are resistant to Levamisole. Resistance is developing to Cydectin. Some farms are down to their last usable wormer.

In tropical areas such as South America, worms are 100% resistant to every known drug and they lose 20% of their animals every year
Where does this leave us? If we continue doing what we are doing, we may have no wormers available to use in the near future.
What can we do?
Extend the usefulness of the wormers that we have

Develop other strategies for controlling worms, such as fungi that trap worm larvae, copper boluses in the rumen and vaccines.

We need to accept the fact that we may never eliminate all of the worms from our animals.

A low number of worms are actually a good thing. Animals develop resistance to the worms that they have and don’t let any more get established.

Resistance can be natural; some animals are just er than others.

Resistance can be genetic; they pass their resistance (or lack of) to their offspring.

Keeping animals healthy will help them to develop their resistance.

Managing the pastures so the animals pick up fewer worms.

20-30% of the animals in your herd carry 80% of the worms. (These are probably your skinny animals)
How else can you tell which of your animals have the worms?

Have your veterinarian do a fecal FAMACHA

Developed in South Africa where worms are a huge problem and people have no money and no education. It was developed to be easy to use and use the least amount of wormer.

Since Haemonchus worms suck blood, the animals with the most worms will have less blood and be more anemic.

The level of anemia can be determined by the pinkness of the color in the inside of the eyelid. FAMACHA is a color chart that relates the eyelid color to whether or not the animal is anemic enough to need treatment.

It really is OK to NOT worm your animals.

When you give wormer to an animal, you only kill off most of the worms. The worms that are left behind will produce offspring that are also resistant to the wormer. Eventually, the only worms left are resistant and your wormer doesn’t work any more.

If you under-dose an animal (give less than the full dose), resistance develops even faster.

Only worming some of the animals lessens the chances of the worms becoming resistant.

When you give wormer to an animal that only has a few worms that it may be getting resistant to, you upset the balance in that animal, possibly causing it to pick up more worms the next time around.

By not worming an animal, it is still going to deposit some worm eggs onto the pasture, but those worms will be sensitive to your wormer the next time around.

Having some sensitive (untreated) worms on the pasture dilutes out the resistant worms. The next time you need to worm an animal again, that wormer will be more likely to work for you again

Pasture Management: What you can do to help your animals pick up fewer worms.

Worm larvae get dried out easily, so they stay close to the ground in dry weather.

If goats are grazing very short pastures (July and August), they are going to pick up huge amounts of worms.

If the grass is taller, they don’t pick up as many worms. You can do this by grazing fewer goats in a given area or rotating pastures to let the grass catch up.

Goats actually prefer to browse, or eat tall weeds. This is nature’s way of protecting goats from worms.

Part of the problem we are having with worms is that we have been selecting for “wimpy” animals and relying too heavily on our wormers to deal with the problem.

When you select herd replacements, choose animals and their offspring that have stayed fat and healthy without needing to worm them.

If you have animals that are always skinny and have pale eyelids and always need to be wormed, do you really need these animals on your farm? They are costing you money because you have to worm them more often (and the worms are eating all your feed). They are also putting more worms onto the pasture for your other animals to pick up.

When you purchase new animals, don’t buy skinny, wormy animals! Check their eyelid color and body condition.
When you bring animals home, keep them separated for at least 10-14 days.

Try to keep them off pasture; a stall or dry lot is best. Do everything you can to get rid of their worms before you mix them with your other animals. Worm them with 2 or 3 wormers from different classes at once (Ivomec and panacur, maybe cydectin) and check a fecal in 10-14 days. This quarantine period will also keep the new animals from spreading other diseases.
Smart Drenching Worm like you mean it!

You are trying to get the absolute maximum effectiveness from your worming treatments.

Hold the animals off feed for 12 –24 hours. This makes the wormer get to where it needs to go faster and at a higher level.
Make sure you give the wormer over the tongue instead of in the cheek pouch. Using a dosing syringe can help.

Repeat the dose in 12 hours for panacur and valbazen or 24 hours for levamisole.

Give all wormers orally to sheep and goats

Give 1 ½-2 times the sheep or cattle dose

Modern wormers are extremely safe (except levamisole). Don’t be afraid to give more if they spit some out.

How do you know that your hard work is paying off?

Check your animals every time you handle them. Use the FAMACHA card and don’t rely on memory.

You should be checking at least every 3 months during the cooler weather and at least once a month during the hot, dry summer (June-October) when the animals are grazing really short pastures. Animals under 1 year of age will need extra attention since they will have less resistance and can die very quickly from worms.

Have your vet check fecals on different groups of animals every 3-6 months. Since FAMACHA only really checks for Haemonchus, the bloodsucking worm, there could be other worms causing problems.

Use the chart provided with the FAMACHA cards to see if your animals are becoming more or less anemic (with pale eyelids). Fewer animals in categories 4 and 5 means that you are going in the right direction. More anemic animals means that you need to do something different to get better control of the situation. Check with your veterinarian to find out what might be going wrong.